Use discount code vestibular.org and 10% of your purchase goes to VeDA.

Support us when you shop

When you purchase gifts or essentials at smile.amazon.com, select Vestibular Disorders Association as your designated charity.

Information on this website is not intended to be used for medical diagnosis or treatment.

VeDA does not specifically endorse any product or service advertised on this site.

By the Vestibular Disorders Association

Most people who develop peripheral vestib­ular problems will never need to consider surgical treatment. With time or medical treatments such as vestibular rehabilitation therapy and dietary changes, the brain adapts to vestibular loss with a complex process called vestibular com­pen­sation. However, if the vestibular system is unstable, com­pen­sation cannot occur and vertigo and other symptoms do not resolve. In this case, surgical intervention may be considered.

Surgical procedures for peripheral vestibular disorders are either corrective or destructive. The goal of corrective surgery is to repair or stabilize inner ear function. The goal of de­struc­tive surgery is to stop the production of sensory information or prevent its trans­mis­sion from the inner ear to the brain. The type of surgery used depends upon the diagnosis and the medical and physical condition of the individual.

The inner ear organs are accessed in surgery with either a trans-canal approach through the ear canal or with a crani­ot­o­my through an opening made in the skull. 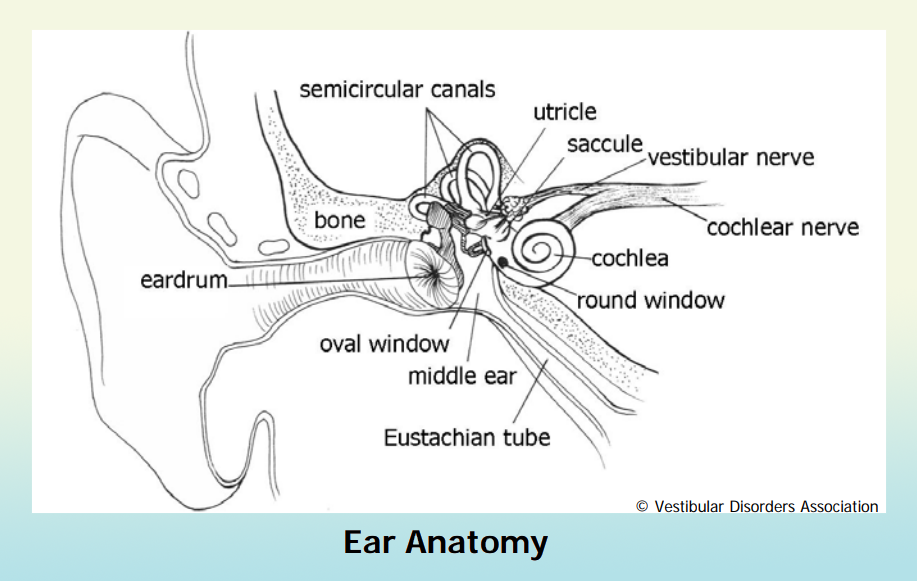 Ménière’s disease produces episodic vertigo, fluctuating hearing loss, tinnitus, and a sensa­tion of ear pressure or full­ness. It results from abnormally large amounts of a fluid called endolymph collecting in the inner ear. Surgical procedures used to treat Ménière’s disease are designed to either stabilize fluid volume or destroy the transmission of signals traveling from the ear to the brain.

A vestibular neurectomy or vestibular nerve section (VNS) is performed with a craniotomy and is a destructive procedure that severs the vestibular branch of the acoustic nerve to stop the flow of balance information from the ear to the brain. The brain can then compensate for the loss by using only the signals from the opposite ear to maintain balance.

When a per­son with unilateral Ménière’s disease still has some hearing, VNS is considered effective for treating violent episodic vertigo. However, it is usually avoided in older individuals because of concerns about healing, the brain’s ability to compensate for the change in balance informa­tion, and the general stress of the surgery. This surgery is performed near the brain. A clear boundary between the balance and hearing nerves does not always exist, so the nerve may be incom­pletely severed. The surgery may also cause severe vertigo, nausea, headache, and infection. Other possible bad out­comes include hearing loss, facial nerve damage, develop­ment of a cerebrospinal fluid leak, and no improvement in vertigo. Vestib­ular compen­sation may be incom­plete or un­successful VNS is riskier than labyrinthect­omy or gentamicin infusion (described below). This surgery requires general anesthesia and a short hospitaliza­tion. It is not reversible.

A labyrinthectomy is a destructive surgery to remove the balance organs (semicircular canals, utricle, and saccule) so that the brain no longer receives sensory signals about gravity and motion changes from the operated ear. This procedure is highly effective in stopping violent episodic vertigo with unilateral disease, meaning disease that only occurs in one ear. However, because the hear­ing organ (cochlea) is also sacrificed with a labyrinthectomy, the procedure is typi­cally only considered when a person has already lost all hearing function in the ear. General anesthesia is used for either a craniotomy or transcanal approach.

When the surgery is performed with a transcanal approach, there is a greater risk of not removing all the tissue necessary, resulting in persistent vertigo. Other possible bad outcomes include: facial nerve damage, infection that could involve the brain, a permanent increase in tinnitus, taste disturbance and dry mouth in the immediate postoperative period, incomplete vestibular compensation, and spinal fluid leakage. In addition, destruc­tion of balance function in one ear may cause increased imbalance if disease eventually occurs in the opposite ear.

A chemical labyrinthectomy is also known as gentamicin infusion, or trans­tympanic or intratympanic gentamicin treatment. With a transcanal approach, this destructive procedure introduces an antibiotic into the middle ear for absorp­tion by the inner ear via the round window, the thin membranes sep­ara­­ting the middle ear from the inner ear. The drug destroys the vestibular hair cells so that they cannot send signals to the brain. Different delivery techniques exist to inject or wick the antibiotic to the desired location. This proce­dure is an alternative to VNS when there is hearing to preserve. Its advantages are that it does not typi­cally require a hospital stay, and the severe vertigo, nausea, and vomiting experienced with labyrinthectomy and VNS are usually avoided. The intended outcome is to control violent episodic vertigo without changing hearing. Possible bad outcomes include continued vertigo as well as hearing loss, which is more common when the drug is given over days rather than weeks. Unsteadi­ness may be experienced for days, weeks, or months. The exact dosage needed to control vertigo without causing permanent hearing loss is unknown.

Some physicians are using intratympanic ster­oids in the middle ear as a temporary stabiliz­ing procedure that reduces inflam­mation and helps control vertigo. Unlike destructive chemical treatments, this procedure is known to preserve or even improve sensorineural hearing loss and problems with tinnitus.

Endolymphatic sac decompression is a stabilizing procedure designed to relieve endolymphatic pressure in the cochlea and vestibular system. The aim of this surgery is to control vertigo and possibly improve tinnitus and stabilize hearing loss. A variety of decom­pression tech­niques exist; most are performed via a craniotomy. One method involves allow­ing the sac to decompress by removing the mastoid bone surrounding it. Other techniques involve inserting a shunt (a tube or strip) into the endolymphatic sac so that, theoretically, excess endo­lymph can drain out into the mas­toid cavity or other location. However, shunts often fail within a year or two when they become clogged with scar tissue. Other possible bad outcomes include hearing loss, new vestibular system damage resulting in in­creased imbalance and vertigo, postop­era­tive inflammation, infection, cerebro­spinal fluid leakage, and facial nerve damage. The effec­tiveness of decom­pression techniques in con­trolling vertigo remains in doubt, which is why destruc­tive procedures are typically preferred.

A perilymph fistula (PLF) can cause dizzi­ness, vertigo, hearing loss, nausea, imbalance, and ear fullness. These symp­toms may worsen with changes in air pressure, as well as with exer­tion and even normal activity. A PLF is an abnor­mal opening in the fluid-filled inner ear typically occurring in the oval window, the round window, or both. With a PLF, changes in middle ear pressure will directly affect the inner ear and cause symptoms. Many physicians feel that PLFs occur only rarely and are seldom a cause of vertigo. This leads to a range of opinions about whether PLF surgery is effective in controlling vertigo.

Oval or round window plugging is a stabiliz­ing surgical procedure designed to patch the fistula in order to stop the leak­age of peri­lymph fluid. Local or general anes­thesia is used, the middle ear is enter­ed with a trans­canal approach, and tissue taken from the external ear or from behind the ear is used to patch the fistula. An extend­ed post­surgical period of severe activity restriction is advised to help ensure the success of the graft. Possible bad outcomes include a worsening of symptoms and a potential for hearing loss.

Stabilizing the ear with inser­tion of pneumatic equalization (PE) tubes has also been dis­cuss­ed as a method of treat­ing PLFs. A tube is inserted through the eardrum into the middle ear to equalize the air pressure on both sides of the ear­drum. This reduces movement of the eardrum, which in turn reduces the move­ment of the stapes bone against the oval window. The procedure can be done in a doctor’s office using local anesthesia. Possible bad outcomes include hearing loss, failure of the hole in the eardrum to close after the tube falls out or is removed, and infection. Opinions vary about using PE tubes with PLFs, includ­ing a concern that the tube may create a portal for bacterial infection to travel from the outer ear to the inner ear through the PLF.

Benign paroxysmal positional vertigo (BPPV) causes vertigo, dizziness, and other symptoms due to small crystals of calcium carbonate called otoconia that collect within a part of the inner ear. With head movement, the displaced otoconia shift, sending false signals to the brain.

It is usually treated successfully without surgery by using in-office BPPV (e.g., Epley) maneuvers. However, canal partitioning or canal plugging is some­times used. This stabi­lizing surgical procedure is designed to stop the move­ment of endolymph and oto­conia within the affected semicircular canal (usually the posterior canal) so that it no longer sends false signals to the brain. A crani­otomy is used to access the inner ear organs in order to make a hole in the canal, which is then filled with small bone chips and human fibrin­ogen glue. Possible bad out­comes include transient or permanent hearing loss, mild but constant postoperative imbal­ance for several weeks, and continued vertigo.

In superior canal dehiscence (SCD), a dehis­cence (opening) exists in the bone overlying the superior semicircular canal of the inner ear. There are normally only two mobile windows in the inner ear: the oval window, through which sound energy is transmitted into the inner ear via the stapes bone; and the round win­dow, through which sound energy is dis­sipated from the inner ear after traveling around the cochlea. SCD creates a third mobile window that can cause conductive hearing loss, vertigo, and oscillopsia, a visual problem where stationary objects to appear to be in motion. These symp­toms are evoked by loud noises or by maneuvers that change middle-ear or intracranial pressure (such as coughing, sneezing, or straining).

Surgical repair of the dehiscence typi­cally uses canal plugging to stabilize the canal, reducing the signs and symptoms of SCD. The main risk of this procedure is hearing loss in the affected ear, although this risk is low in patients who have not undergone prior SCD surgery or prior stapedectomy surgery (described below).

An acoustic neuroma (also called a ves­tibular schwannoma) is a noncancer­ous tumor that grows from the tissue of the vestibular branch of the eighth cranial nerve. Disequilibrium is a common symptom; vertigo is less common. Surgical removal of the tumor involves a procedure similar to a VNS. Possible bad outcomes include an inability to remove the entire tumor, hearing loss or deafness, facial nerve damage, and persistent headache.

Otosclerosis is a condition that can cause conductive hearing loss, tinnitus, and more rarely vertigo and unsteadiness, because abnormal bony growth fixates the stapes bone, prevent­ing it from vibrating normally against the oval window in response to sound waves. A stapedectomy is a corrective transcanal surgery that replaces the stapes with a prosthesis and is performed with either general or local anesthesia. Possible bad outcomes include no hearing improve­ment or a total loss of hearing in the operated ear, initiation or worsening of tinnitus, increased vertigo, BPPV, and/or PLF.

To read more about inner ear surgeries used to treat vertigo and disequilibrium, visit www.vestib­u­lar.org, where you will also find information about other treat­ment options, diagnostic testing, and support resources.

This document is not intended as a substitute for professional health care.

DID THIS INFORMATION HELP YOU?

Your support of VeDA matters. Please help us continue this important work by becoming a member or donor.

HAS THIS INFORMATION HELPED YOU?