Use discount code vestibular.org and 10% of your purchase goes to VeDA.

Support us when you shop

When you purchase gifts or essentials at smile.amazon.com, select Vestibular Disorders Association as your designated charity.

Information on this website is not intended to be used for medical diagnosis or treatment.

VeDA does not specifically endorse any product or service advertised on this site.

What is superior Semicircular canal dehiscence?

Patients with SSCD can experience vertigo and oscillopsia (the apparent motion of objects that are known to be stationary) evoked by loud noises and/or by maneuvers that change middle-ear or intracranial pressure (such as coughing, sneezing, or straining). Auditory manifestations of the syndrome include autophony (increased resonance of one’s own voice), hypersensitivity to bone-conducted sounds, and an apparent conductive hearing loss revealed on audiometry. Some patients have exclusively vestibular symptoms and signs; some have both auditory and vestibular manifestations; and still other patients have exclusively auditory complaints.

Following is a video filmed by Dr. P. Ashley Wackym of Portland, Oregon's Ear & Skull Base Center, showing a patient who has suffered from superior semicircular canal dehiscence. View this and more videos by Dr. Wackym on his YouTube channel.

With a dehiscence in the bone that is supposed to cover the superior semicircular canal, the fluid in the membranous superior semiciruclar canal (which is located within the lumen—tubular cavity—of the bony canal) can be displaced by sound and pressure stimuli. There are normally only two points of increased compliance (yielding to pressure) in the inner ear: the oval window, through which sound energy is transmitted into the inner ear via the stapes bone; and the round window, through which sound energy is dissipated from the inner ear after traveling around the cochlea. SSCD creates a third mobile window into the inner ear. The signs and symptoms in this syndrome are due to the physiological consequences of this third window. 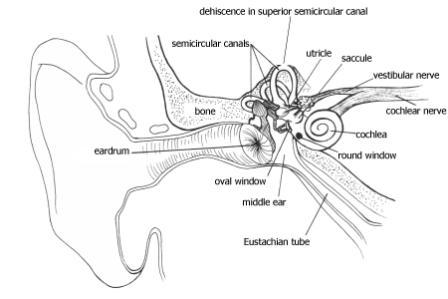 The mean age at the time of diagnosis is around 45 years. Unilateral SSCD occurs relatively equally in the right and left ears. About one-third of patients have evidence of bilateral SSCD at the time of diagnosis. In patients with bilateral dehiscence, there is typically one ear from which the symptoms and signs are greater. In patients with unilateral dehiscence, the bone overlying the contralateral superior canal (in the opposite ear) is often abnormally thin.

These findings support the notion that SSCD is due to a developmental abnormality. Temporal-bone histopathological studies suggest that 1–2% of the population have abnormally thin bone overlying the superior canal (Carey et al. 2000). Disruption of this thin layer (as may perhaps occur with trauma or over time due to the pressure of the overlying temporal lobe of the brain) leads to the onset of symptoms and signs.

Vestibular symptoms and signs: The vestibular symptoms in SSCD can be debilitating and often provoke patients to seek medical attention. Patients may note that loud noises cause them to see things moving or that they experience a similar sensation when they cough, sneeze, or strain to lift something heavy. They may perceive that objects are moving in time with their pulse (pulsatile oscillopsia). Some indi¬viduals can bring on the sensation of motion—and cause their eyes to move—by pressing on their tragus (the area of skin and cartilage located just outside the ear canal). Patients may experience a feeling of constant disequilibrium and imbalance.

The signs of vestibular abnormalities in SSCD relate directly to the effect of the dehiscence in creating a third mobile window into the inner ear. One of the most important functions of the vestibular system is to keep the eyes focused on objects of interest during head movements. A principle underlying the organization of these vestibulo-ocular reflexes is that the eyes move in the plane of the semicircular canal that is being activated.

Analysis of the eye movements evoked by sound and pressure stimuli in patients with SSCD led Minor and colleagues (1998) to the identification of this syndrome. These evoked eye movements often align with the plane of the superior canal. Furthermore, the direction of the eye movements provides support for the theory of a third-mobile-window mechanism. Stimuli that result in inward motion of the stapes footplate (such as loud sounds, applying pressure to the external ear canal, or blowing pressure through the nose while pinching the nostrils) produce an excitation of the superior canal. Evoked eye movements in these situations are typically vertical-torsional, with the eyes moving up and the superior pole of each eye moving away from the SSCD ear. Stimuli that result in outward motion of the stapes footplate (such as negative pressure applied to the external ear canal) or that increase intracranial pressure (such as taking a deep breath and bearing down, or compressing the jugular vein with pressure on the neck) typically result in eye movements that are in the same plane but opposite in direction. The eyes move down, and the superior pole of each eye moves toward the SSCD ear.

Auditory symptoms and signs: The auditory symptoms and signs in SSCD may mimic those in other ear disorders and may at times seem bizarre. Some patients have a conductive hearing loss for low-frequency sounds that can resemble the pattern in otosclerosis. These diagnostic entities can be distinguished by acoustic reflex testing: patients with otosclerosis lose the acoustic reflex response in the affected ear early in the course of the disorder, whereas the response remains intact in SSCD. This distinction is important because patients who have conductive hearing loss resulting from SSCD will not benefit from stapedectomy surgery.

Patients with SSCD may also complain of symptoms such as hearing their eye movements, hearing their own voice too loudly in the affected ear (autophony), or having a distorted sensation of sound in the affected ear during activities such as running. These auditory symptoms and signs are also manifestations of the third mobile window created by the dehiscence. Bone-conducted sounds are amplified by the effects of the dehiscence, whereas the energy from air-conducted sounds is partially shunted away from the cochlea and through the dehiscence.

CT imaging: High-resolution CT scans of the temporal bones are very useful in making the diagnosis of SSCD. These scans demonstrate the opening in the bone that should cover the superior canal. Care must be exercised, however, because such scans may miss a thin layer of intact bone overlying the canal. Applying specific parameters for the CT imaging can improve the specificity of the scans (Belden et al. 2003), but false positives can still occur, even with the highest-resolution scans. Individuals who are suspected of having SSCD are strongly urged to have their CT scans performed at a center experienced in the diagnosis of SSCD. It must be emphasized that even with these scans, the diagnosis depends upon characteristic clinical findings and other physiologic tests.

Vestibular evoked myogenic potentials (VEMP): In SSCD, loud tones evoke a short-latency relaxation potential in the ipsilateral sternocleidomastoid muscle. Patients with SSCD typically have a lower-than-normal threshold for the VEMP response, and the amplitude of the VEMP waveform in an SSCD ear is greater for comparable stimulus intensities than in an ear without dehiscence. The VEMP test plays an important role in the evaluation of patients with suspected SSCD (Zhou et al. 2007).

Many patients with SSCD are able to tolerate their symptoms and reduce the more severe effects by avoiding the stimuli that make the symptoms worse, such as loud noises. For other patients, the symptoms are much more debilitating. Pulsatile oscillopsia, chronic disequilibrium, and autophony are some of the symptoms for which avoidance of stimuli is unlikely to be helpful.

Surgical correction: For patients whose well-being is severely affected by SSCD, surgical repair of the dehiscence can be very beneficial. The middle cranial fossa approach has been used most commonly. Plugging of the canal with fascia (fibrous tissue), using small bone chips to secure the fascia in place, has been shown to be more effective than canal resurfacing in achieving long-term control of symptoms. The main risk of this procedure is hearing loss in the affected ear, although this risk is low in patients who have not undergone prior SSCD surgery or prior stapedectomy.

The procedure is very effective in relieving both the vestibular symptoms and the auto¬phony associated with SSCD. Plugging of the superior canal typically results in decreased function in this canal alone, while preserving function in the other semicircular canals (Carey et al. 2007). The reduction of function in the superior canal has minimal negative functional consequences for the patient. In patients with bilateral SSCD, surgery on the more severely affected ear may be sufficient to control their symptoms.

Dehiscence of bone overlying the superior semicircular canal can cause a constellation of vestibular and auditory symptoms and signs. These abnormalities can be understood in terms of the effect of the dehiscence in creating a third mobile window into the inner ear. The diagnosis is made based upon characteristic symptoms, specific findings on clinical examination, CT imaging, and findings on VEMP testing. The diagnosis should never be made exclusively on the basis of CT findings.

For many patients, an understanding of the cause of the symptoms and avoidance of provocative stimuli such as loud noises may be sufficient. For those patients who are debilitated by their symptoms, surgical plugging of the superior canal can be very beneficial in alleviating or substantially reducing the symptoms and signs.

Click here to read stories about SSCD patients on The Mighty.

HAS THIS INFORMATION HELPED YOU?